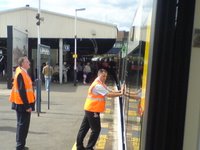 Patience definitely is a virtue!

Today I had to go to the Home Office to pick up my and Josh’s passports. This, in itself, is a nightmare ‘cos it usually means waiting around for about 4 hours in a sterile government building with no music, heating (at least it’s still warm over here) or smiling, just the occasional “ticket number A154 to counter number 29 please”!

But today was worse! I left home around 9.20am. Catching the tube was fine. I got to Victoria Station only to discover a 45 – 55 minute delay on all trains due to a thoughtless jumper at Clapham Junction. Why do people jump in front of high-speed trains at peak times? Can’t they be more thoughtful to the rest of the world and do it in the middle of the night or something? After all, the Gatwick Express runs almost 24 hours a day!

Anyway, we pull out of the station 45 minutes later than expected on what should have been a 16 minute train ride to East Croydon (where the aforementioned Home Office is situated) only to stop just outside Clapham Junction station.

At first I assumed that it something to do with the insensitive jumper, but when the driver announced that we had to disembark, I started to get a little suspicious. The front 2 coaches were unloaded onto the platform first, then the back 2 (where I was sitting) were told to get off onto the tracks once the power was cut. When they told us to leave all bags on the train, I knew that something definitely was wrong! We started to make our way to the rear of the train and when I was about 6 feet from the door, the driver announced the all clear!

We then waited for them to power up the tracks and train again, move fully into the station and get everyone back onto the train before setting off once again.

Apparently some (even more inconsiderate, thoughtless, selfish) plank had climbed onto the train at Victoria with his suitcase and then got off again, forgetting the case on the train. This was duly reported to the driver who called ahead for the bomb squad!

An hour and a half later, I arrived in Croydon. Luckily I am a very patient person because another two and a half hour wait lay ahead for me at the Home Office!

I finally got back to London at 4pm, passports in hand!

I can’t wait for my holiday next week…

Last Sunday, my son and I decided to go for a short hike out in the Yarra National Park near Wesburn. Britannia Creek is also home to...