My 4 year old son, Josh, loves to come fishing with his dad but he usually gets bored within 15 minutes. So, this summer I was determined that he catch something. Just to keep him interested in the sport.

While on holiday in Eden, I took him down to the wharf one afternoon and rigged up his 5 foot toy rod with the smallest hook that I could find. There were plenty of small baitfish swimming around the wharf in the calm water, so I thought it would be easy enough for him to catch one. We had some smelly prawns for bait, which I broke into small pieces to put on the hook before dropping the line over the side of the jetty.

I eventually talked him out of it and within 15 minutes we had our first little yellowtail. You can see from the photo how small it was, but he was super happy after reeling it in all by himself. He was even happy to throw it back when I explained that it was too small to keep. We had a few more bites over the next half hour, then boredom set in so we headed home.

Last weekend, we went down to Balnarring Beach. We marched along the creek, rods in hand, until we found a section of deeper water. Hoping to catch some tasty bream, we rigged our lines with worms.

After about 20 minutes, Josh reeled in his hook to check if he still had bait on it. Bang! A bream took it! He nearly peed himself in the excitement of the moment. He reeled in as quickly as his little arms could. He had caught a nice little bream which he wasn’t too keen to throw back, but we eventually convinced him that we would be back next year to catch it.

His next hook-up was a decent sized bream though. It ended up on the BBQ for dinner on Sunday night and it was enough for myself and the 2 kids to eat. He also managed to catch a 3rd bream which was also returned to the water to be caught again another day.

PS: Out of the seven of us fishing, Josh caught the most fish! I managed two small bream, but nobody else caught anything!

How to make a mountain bike video

Ever wanted to make a mountain bike video? Here are some great... 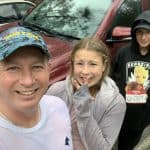