It’s been 5 months since I brewed my porter, so I dug a bottle out of my ‘cellar’ to try over the weekend. 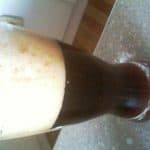 Firstly, when I popped the top off it began to froth quite a bit. At first I was worried that it had gone off (usually a cause of ‘gushing’) but once I had poured it and tasted it, I knew that it was fine!

It has lost the sweet honey flavour. There is a strong taste of caramel with hints of chocolate in it. I was drinking it with a delicious red meat dish which really enhanced the flavour.

Who owns who in beer land?

An interesting infographic of which companies own which beer brands around the world. Click on the pictures to see the larger...

I've been fiddling again. I was visiting a friend's blog and noticed that she uses this great little plug-in to post her recipes to her...

As we all know, the Oatmeal is a fountain of knowledge, a source of wise council, a veritable oracle. On everything. This is what he has...